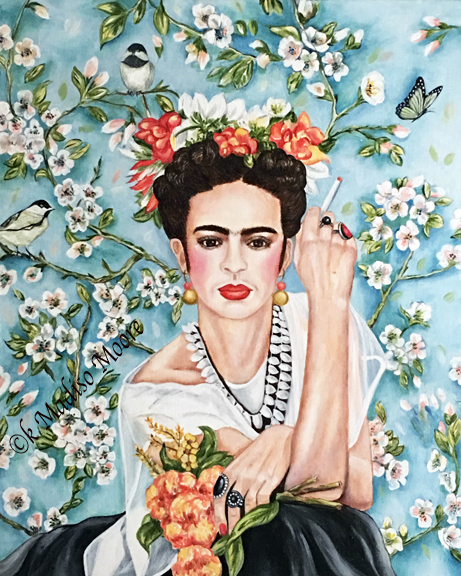 I just loved painting this piece. It just went right
from designing to execution and it worked out just
as I intended it to. Just love when that happens.
I am getting to know her face well and enjoy painting her
and about her life. I found this wonderful article about her
being a feminist so I am going to share it with you.
For her time she was just so sassy and independent.
She drank and smoked all the time and didn't mind versing
her opinion and living her life the way she wanted and not
what was "expected" of a woman at that time. I admire that.
I admire her and what she stood for. I admire her as an artist
and all she had  to endure. This is long but worth it.
Enjoy!

Kahlo transformed the word “different” to “normal.” To this day, her work and her legacy attracts artists, as well as diverse groups such as feminists, gays, lesbians, communists, patients, the emotionally hurt and the politically active.

Here are five reasons why Frida is an icon of feminism and freedom:

1. Public bisexuality. Frida took pride in her sexuality. She liked to have both women and men in her bed. What primarily prompted her to have many extramarital affairs was Diego’s infidelity and his incapability of remaining sexually loyal to her. Eventually, the couple ended up having an open marriage.
Frida openly made love to the women with whom Diego went to bed—such as the American actress,  Paulette Goddard. Diego didn’t have a problem with Frida broadening her sexual
experiences with women, but he got outrageously jealous of the men she slept with—as Leon Trotsky.

2. Defying the “female beauty” standards. Frida didn’t care to fit with the norm. She kept her “masculine” features untouched—she didn’t pluck her eyebrows, her mustaches or shave her armpit hair. It is said that she also darkened her eyebrows with a black pencil.
She created her own individual style, especially through her clothing. At the time, when women were keen on wearing tight dresses, Frida wore long skirts and loose shirts with vivid patterns. She braided fabrics into her hair and wore accessories that created a fashion frenzy across the world.Although Frida defied the standards of beauty in society, she’s still considered as one
of the most attractive women.

3. Defying gender stereotypes. Women had few rights during the 1900s. At a time when men were seen as the dominant sex, it was expected of women to be housewives. Frida attended a co-educational school, something that was highly unusual in those days. Isabel Alcantara wrote,
in her book about Frida, “There were only about five girls to 300 boys at the school, and Matilde (Frida’s mother) was outraged at the thought that one of them was to be her daughter.”
Unlike other girls at school, Frida wore her hair parted and pulled back. She also appeared for family photos in men’s clothes.Not only did she dress like men did, but she also challenged
men in drinking tequila. She continued drinking throughout her lifetime, despite her doctor’s firm disapproval.

4. Exploring intimate female experiences in her paintings. Again, during the 1900s, female experiences were private—but Frida publicized miscarriages, pregnancy, menstruation, operations, breastfeeding, infertility and sexual organs. Her paintings may seem disturbing at first, but they embody the challenges of being a woman.
She painted her self in a surrealist method that has shocked great painters across the world. Andre Breton, the French founder of surrealism, wrote of her work: “I must add that no other painting is so essentially feminine, for she fluctuates between wide-eyed innocence and sheer depravity in order to appear as seductive as possible.”
Her life and her artwork were directly interwoven with one another. Kahlo takes the viewer inside a woman’s mind and heart, and let us examine the fears, passion and suffering that secretly resides within us.

5. Politically active. Although she was born in Mexico, a country of tradition and Catholicism, Frida was an atheist and a proud communist. Despite her frequent health issues, Frida was an active member of the Communist party. She believed that only through Communism can we become human. She was also a Mexican patriot to a fault. She changed the year of her birth,
from 1907 to 1910, to coincide with the Mexican revolution.
Kahlo had strong political convictions that were inspired by Marxist ideology. She wrote in her diary: “I’m convinced of my disagreement with the counterrevolution—imperialism, fascism, religion, stupidity, capitalism and the whole gamut of bourgeois tricks. I wish to cooperate with the revolution in transforming the world into a classless one, so that we can attain a better rhythm for the oppressed classes.”

Leon Trotsky, the exiled Marxist revolutionary with whom she had an affair, lived with her and Diego at  La Casa Azulfor two years. She also wrote about him: “I love Marx, Engels, Lenin, Stalin and Mao Tse as pillars of the new Communist world. Since Trotsky came to Mexico, I have understood his error. I was never a Trotskyist.”
.
**Sources:
Frida Kahlo and Diego Rivera, Isabel Alcántara, Sandra Egnolff
Frida Kahlo Retrospective. 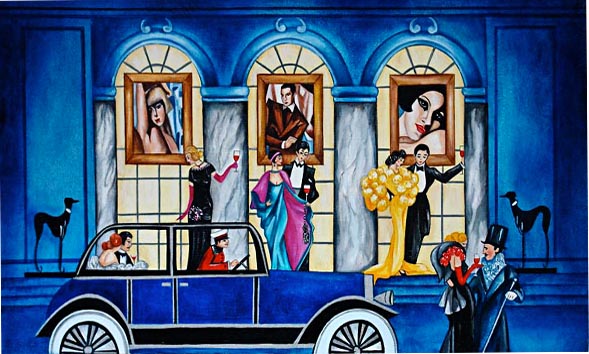 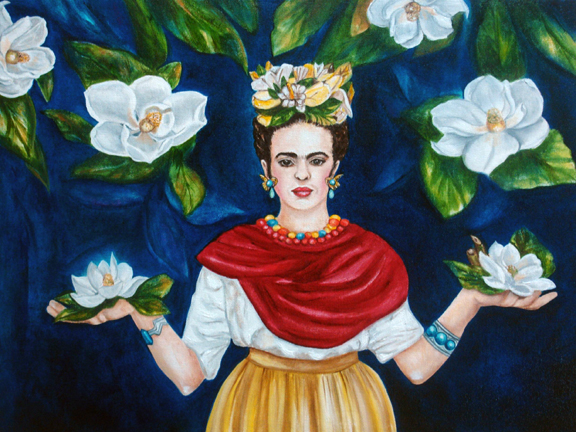 This is another dream. I was researching Frida and found this lovely  painting she created of Magnolias and other flowers. That night I had a dream of Frida surrounded by Magnolias and wearing her arrangement in her painting as a headpiece.  Went to my studio early am and started  right in and this is what evolved. Love it when things like this happen. I dream so much of my work that I have even started a new series titled
Only in My Dreams  This will be all kinds of work,  all subjects, no series, just dreams. What do you think?
There are so many meanings for the representation of the Magnolia that can refer to Frida. Maybe that is why she favored them. Here are a few.
The Pear Cactus Flower is a representation of life and death existing in many of Frida Kahlo's paintings. Also in the right of the flower arrangement there is a open calla lily whi…